An Excellent Booke of the Arte of Magicke - Hardback (signed) 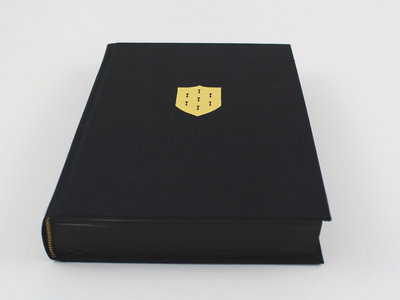 EU ORDERS: We have no idea what is happening regarding VAT from 1st July. Bandcamp has no info or guidance. Until we can work out an alternate sales platform please do not order from us unless you are willing to be liable for extra VAT, customs and handling charges in your country.

* This item can be either signed or dedicated by Phil Legard - please attach a note to your order if you wish for a specific dedication, otherwise it will be simply signed. *

An Excellent Booke of the Arte of Magicke: The Magical Works of Humphrey Gilbert and John Davis, transcribed from British Library Additional manuscript 36674, edited and introduced by Phil Legard, with supplementary essays by Alexander Cummins, and a foreword by Dan Harms. Published 2020 by Scarlet Imprint.

The first part of the book, Texts, opens with a colour facsimile of ff.47r–62v from Add. ms. 36674, known as the Excellent Booke and Visions, followed by modernised and diplomatic transcriptions.

The magical experiments conducted by Elizabethan explorer, soldier and courtier Humphrey Gilbert, along with his scryer John Davis, during the spring of 1567 are notable for their forceful methods and stripped down Protestant ritual. The spirits are called into a ‘crystal stone’ by way of a large number of conjurations, charges, constraints, curses and bonds. The work includes the practical conjuration of Bleth, Aosal, Assassel (Azazel) and the four demon kings of the winds, namely Oriens, Amaimon, Paimon and Aegyn. It is evidently based on an older text or texts, adapted to the Protestant outlook of the period, and has also been supplemented with revelations and guidance received first-hand by Gilbert and Davis over the course of its composition. As such, the texts are a rare example of the poiesis, or coming-together, of a ritual magic book. The texts attest to the continuity of medieval ritual magic into the early modern period.

Visions is a record of visions in the crystal, detailing events which took place before, during and after the composition of the Excellent Booke. In the course of this work, the master – Humphrey Gilbert – and scryer – John Davis – converse with a wide-range of spirits as well as religious and occult personalities, including Assasel, Solomon, Roger Bacon, Cornelius Agrippa and four angelic evangelists. The pair experience a series of remarkable sights concealed behind the seven-keyholed door of the house of Solomon. On occasion the visions bled into the waking world in encounters with great demonic dogs and the physical manifestation of the prophet Job.

The Excellent Booke and Visions are, as Legard writes in his Preface, ‘unique documents of sixteenth century magical practice: ones that deserve to be widely read and studied by scholars and practitioners alike since they preserve a detailed account of both the making and the use of a grimoire.’ A book of particular note to those interested in Azazel, the fallen angel and necromantic traditions, students of the grimoires and the practical workings of dirty medieval magic.

Appended to the Excellent Booke are three further, related manuscript transcriptions, the necromantic graveyard ritual in Experiments of Azasel, Ancor, Anycor and Analos, from Illinois Pre-1650 ms. 0102, the scrying procedure of An Experiment of Bleth, from Sloane 3824, and the necromantic and treasure hunting rites of Related Experiments, from Case ms. 5017.

In the second part of the book, Contexts, Dr Alexander Cummins provides a trilogy of essays. He first surveys early modern necromancy, its tools and techniques in their historical setting. He then discusses scrying techniques in depth, with reference to Artephius, Dee and Kelley, Aubrey, Lilly, Forman et al. He concludes with a discussion of tutelary shades, and the learning of magic from dead magicians, whether Solomon, Adam, Cornelius Agrippa or Roger Bacon. Thus armed, the appropriately black-clad reader can engage with the Excellent Booke as a practical grimoire of the necromantic art.

Phil Legard draws the book to a close with an essay on the phenomenology of the necromantic workings of Gilbert and Davis which provides an open door for both practitioners and academics through which to pursue the performative and affective practice of magic.